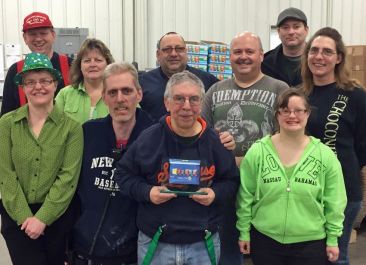 Country Valley Industries (CVI), a subsidiary of ACHIEVE, is proud to announce that they are the recipient of the Frito-Lay “Quality Level of Excellence” Award for 2014! The award was presented to CVI in recognition of the near perfect year they had in quality control. The CVI Frito Lay Production Team shipped out 2.9 million bags of snack chips with only one error resulting in being one bag short in a package!

Frito-Lay presented the award to Country Valley Industries on Wednesday, March 4th at the annual Frito Lay Co-Packer conference held in Dallas, Texas. This is the second award that CVI has received in the past 5 years. In 2009 CVI was presented with the coveted Frito-Lay “Contract Manufacturing Quality” Award, granted once a year to the top performing re-packer for Frito-Lay who ranks the highest in Quality Control.

CVI Manufacturing Manager, Duwayne Caroway, states, “This is a very big accomplishment for the team at CVI – to ship out that many bags and only ship one wrong bag shows our consistent commitment to quality.”

Country Valley Industries operates four employment centers – in Binghamton, Johnson City, and Owego. These centers offer a number of vocational opportunities for individuals with intellectual and other developmental disabilities through a number of contracts with community businesses.